Skip to main content
It looks like you're using Internet Explorer 11 or older. This website works best with modern browsers such as the latest versions of Chrome, Firefox, Safari, and Edge. If you continue with this browser, you may see unexpected results.

Introduction to the Field of Sociology

A citation is a standard way to document the book, article, website, and any other source of information you used in your research. It tells your reader where you found your information.

Students are expected to properly cite the sources used in their academic work in order to:

So, a citation includes the relevant information about a source you have used, such as author, title, publisher, date, pages, where you accessed the item. Below is an example of a citation in APA format:

Students are expected to properly cite the sources used in their academic work in order to:

Whenever you quote or base your ideas on another person's work, you must document the source you used. Even when you do not quote directly from another work, if reading that source contributed to the ideas presented in your paper, you must give the author credit.

Citations provide evidence for your arguments and add credibility to your work by demonstrating that you have used a variety of resources.

What is it, anyway?

Common knowledge is facts that can be found in numerous places and are likely to be known by a lot of people. You don’t need to document sources for these facts.

Because the following is a commonly known fact, it doesn’t need to be cited:

John F. Kennedy was elected President of the United States in 1960.

In the following, you do need to cite your source because the idea that "Bush's relationship with Congress has hindered family leave legislation" is an interpretation of facts:

Use quotations when using someone's exact words. When you quote, place the passage you are using in quotation marks, and document the source according to a standard documentation style (MLA, APA, etc). The following is a correctly cited quotation:

According to Peter S. Pritchard in USA Today, "Public schools need reform but they're irreplaceable in teaching all the nation's young" (14).

Paraphrase is using someone's ideas, but putting them in your own words. This is probably the skill you will use most when incorporating sources into your writing. Although you use your own words to paraphrase, you must still acknowledge the source of the information.
If Pritchard says “Public schools need reform but they're irreplaceable in teaching all the nation's young” you are plagiarizing if you write:

Public schools need to be reformed, but we can’t replace public schools’ roles of teaching youth in the United States.

Credit Pritchard and use new words and a new sentence structure, and you can avoid plagiarizing. This is correct paraphrasing:

Pritchard admits that public schools are the best approach to educating children in America, despite his demand to improve the system (14).

A paraphrase should contain all of the author's information and none of your own commentary. Even if you have avoided using the author's words, sentence structure, or style, an unattributed paraphrase is plagiarism because it presents another person’s ideas as your own.

How do you avoid plagiarizing?

To avoid plagiarism, you must give credit whenever you use:

At the end of the last sentence containing quoted, paraphrased, or summarized material, insert a parenthetical citation to show where the material came from (notice the use of brackets to mark a change in the wording of the original):

The St. Martin's Handbook defines plagiarism as "the use of someone else's words or ideas as [the writer's] own without crediting the other person" (Lunsford and Connors 602) 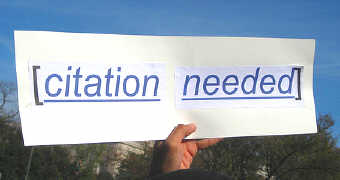 The Writing Center at Centralia College (TAC 301) has tutors available to help you with your college writing. Whatever phase of the writing process, including MLA & APA citations. Check their webpage for their current open hours.

Purdue Online Writing Lab - Purdue University has a great website that will help you with citations. This site covers MLA, APA, and Chicago styles.

The content of these guides, unless otherwise noted, by Kirk Library is licensed under a Creative Commons Attribution-ShareAlike 4.0 International License.